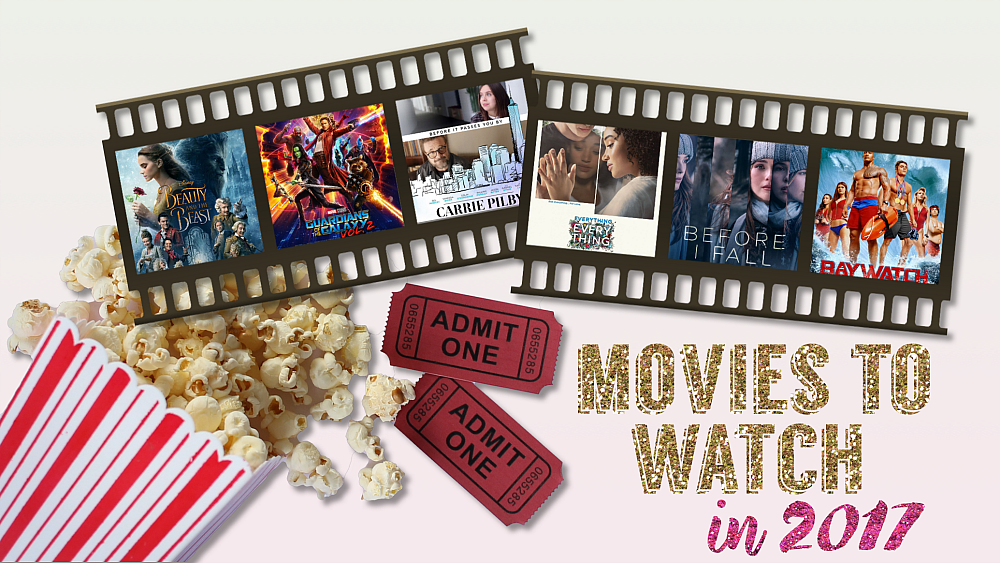 Each year I always have a look at this website to see what movies are being released and make myself a little list of the ones I’d like to see. Here are the ones that are at the top of my list…

Beauty and the Beast

Of course this has to be first on the list. The most exciting film release in years is finally upon us… Yes, Beauty and the Beast is here!

This film will always have a special place in my heart, as the original was the first film I’d ever seen in the cinema when I was just 5 years old. So as you can imagine, I was pretty excited when I went to see it last night. And folks, I have to say, it did not disappoint. From the moment it started until the very end, I didn’t stop smiling. It made me laugh and cry, and it was everything I had hoped it would be and more. 10/10 favourite Disney remake so far, now I’m just wondering if I can convince Matt to go see it again 😉

Guardians of the Galaxy Vol. 2

Ok, so I’m a big Disney princess, fairytale, happily ever after kind of girl. So comic book/superhero movies don’t tend to be on my radar, but Guardians of the Galaxy is an exception. Chris Pratt is hilarious, and baby Groot is just too cute! And you have to love Drax and his very literal take on everything. Matt is really looking forward to this one too, and I can totally watch this one with him (unlike Star Wars ahem). Plus the soundtrack is awesome!

Carrie Pilby is an adaptation of a novel that I hadn’t actually heard of until I saw this trailer. Truthfully I only know about this movie because Colin O’Donoghue from Once Upon a Time is in it and he tweeted the trailer. I watched out of curiosity more than anything; it actually made me think of What If (which I loved) so on to my list it went. It follows Carrie Pilby, an extremely intelligent young woman who graduated from Harvard at 19 years old. However, with her intelligence comes a lack of social skills and she judges others which leads to her being pretty isolated. Her therapist sets her goals to help her make friends, date and just talk to people in general. I think quite a few people can relate to her on some level (I know I can), so I’m really looking forward to watching this.

My second book-to-movie, Everything, Everything is based on the book of the same name. It tells the story of Maddy, a teenager who lives a sheltered life in her home which she is unable to leave due to illness; illness that leaves her extremely vulnerable to anything outside of her home with its filtered air and sterile environment. Enter Olly, her new neighbour who comes along and makes her question everything.

I really enjoyed the book so I’m hoping that the film will be a decent adaptation, although I do expect it will be in very much the same category as most other coming of age tales, but I’m actually OK with that as we don’t always want to watch the hard hitting, critically acclaimed Oscar winning movies. Sometimes, I just want a bit of fluff and escapism.

My third and final book to movie is Before I Fall which again, I expect will be a typical teen flick with an edge. This one is about Samantha, a teenage girl who, after being in a car crash, relives that same day over and over. Each day she learns something about herself and the people around her, and sees how her actions and behaviour have affected various people in her life.

I always remember the original Baywatch TV show from when I was really young; we’re talking less than 10 years old young here. I never actually watched it, but I’m sure most of use around a certain age can remember the menfolk really enjoying it, for two, ahem, reasons belonging to a certain blonde haired lifeguard 😉 Truth be told, it looks totally ridiculous but hey, it has Zac Efron in it looking pretty damn good and quite honestly that’s reason enough for me!

What are you looking forward to seeing this year?
Leave a Comment
Previous Gifts for… Movie Buffs
Next Review: Beauty and the Beast (2017)