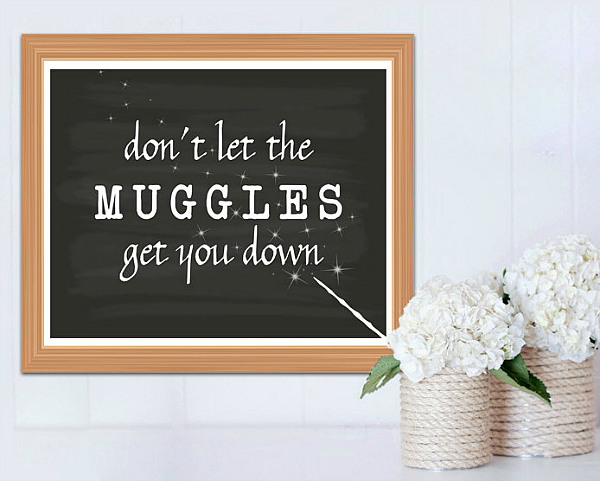 Print available to buy from Etsy
So I have a confession to make. I only finished reading the Harry Potter books about 2 years ago *ducks for cover*. I know, I know… for someone who loves reading as much as me, I should be ashamed. My first experience of the series was when I was in year 5 (about 1997) and my favourite primary school teacher read us this little book that hadn’t long been published about a boy who goes to wizard school. We all loved it, and wrote a letter to J.K. Rowling who actually responded to us which is all kinds of awesome. Then I left primary school and went to secondary school where I discovered much more ‘grown up’ books and so I never really bothered to read the rest of the series. Then came uni where I studied English and during my degree and even after I graduated, I had a reading ‘burn out’ if you will, and didn’t really get back into reading for pleasure until a few years later. I saw all the movies, loved them and finally decided I needed to stop putting it off and read them. I regret not reading them sooner, and I definitely regret not reading them before seeing the movies!

When I saw this tag on Hayley’s blog, Water Painted Dreams, I just had to give it a go…

1. What is your favourite book?
The Order of the Phoenix – it is long, and it also contains Sirius’s death and the heinous Dolores Umbridge, but it just has something about it. Harry’s emotion after losing Sirius, the excellent characterisation of Umbridge, Dumbledore’s Army, finding out about the prophecy, why Dumbledore sends Harry back to the Dursleys’ every summer… I feel like this is the book where it all starts building up to the finale.

2. What is your favourite film?
I actually can’t choose between The Goblet of Fire – the Triwizard Tournament, the Yule Ball (Hermione’s dress is divine), Cedric’s death… and The Deathly Hallows, Part 2 – I think it’s so well done, and it creates such a visual for what happens in the book, and also because of the scene where Hermione tells Harry she’ll go with him, which isn’t in the book… ALL THE FEELS.

3. What is your least favourite book?
The Chamber of Secrets – I think it’s the weakest out of all 7 books, not bad at all and it does introduce Tom Riddle and his diary (and indeed horcruxes), but I just think it was a bit of a filler type book.

4. What is your least favourite film?
The Deathly Hallows, Part 1 – I just don’t think much happens in this one really, it’s the last one I’d choose to watch out of the 8 films if I had a choice.

5. What parts of the books/films made you cry?
Of course there are the deaths: Dumbledore, Fred, Sirius, Hedwig, Dobby, Snape, Lupin and Tonks. But also, Dumbledore and the Drink of Despair, Hermione and Harry talking about Ron and Ginny going out with other people, Hermione erasing her parents’ memories, Harry visiting his parents’ graves with Hermione, Hermione offering to go with Harry to the forest to Voldemort, Harry using the Resurrection Stone and seeing his loved ones before he dies, the conversation with Dumbledore as to whether to go back to living… Phew! And that’s just off the top of my head. ALL THE FEELINGS.

6. If you could hook up with any character who would it be?
Going on the movies, Cedric Diggory is pretty cute, and Neville grew up well didn’t he? Who would have thought it, Neville Longbottom being the hotty 😉 Also Tom Riddle from The Chamber of Secrets is pretty easy on the eyes 😉

7. Who is your favourite character?
Hermione – she’s smart, loyal and her friendship with Harry is one of my all time favourites.

8. Who is your least favourite character?
Dolores Umbridge – she’s a vile creature! More so in the books than the movies, she’s just awful.

9. What is your least favourite line?
Any time ‘Avada Kedavra!’ is used against one of the good guys… The worst when Bellatrix uses it on Sirius :’(

10. What would your patronus be?
A unicorn! I know unicorns aren’t technically real, but they are in Harry Potter. And what better than a magical creature as a patronus? I heart unicorns ♥

12. Which house would you be in?
I’d like to say Gryffindor but I don’t think I’m brave enough – I’ll go with Ravenclaw as I’m definitely a books and learning girl, and this is the house I was sorted into on Pottermore.

13. If you could meet any member of the cast who would it be?
Hmm tough one! Tom Felton (Draco) or Matthew Lewis (Neville) for eye candy purposes… Emma Watson or Bonnie Wright for the girls as they both seem lovely 🙂

14. If you were on the Quidditch team which position would you play?
Probably a keeper or seeker as I’m awful at anything that involves hitting a ball or throwing!

15. Were you happy with the ending?
I think so – I’m sad that so many characters had to die to get there, but I’m glad good won over evil ultimately. Plus Harry and Ginny got their happily ever after, yay!

16. How much does Harry Potter mean to you?
I’m a little obsessed with it now, I think I’m annoying Matt with the constant references and I’ve warned him that when we go to the Studio Tour, he can’t moan at me for getting excited or taking my time there… The series is definitely in my top 5 favourite reads ever, so I guess it means a lot!

Writing this has made me want to re-read and re-watch all of the movies! Let me know if you agree/disagree with my answers, and if you give this tag a go yourself!
You can buy the books here

. You can also get the DVD collection here

Finally caught a smile in a picture 💙

Slowly getting used to sitting in his seat from Au

We went out for a little belated anniversary / OMG